Search for Death Records in Vermont

Our comprehensive guide to the death records in the state of Vermont will help you in finding death records as well as provide you with relevant information about the deceased and the life they lived. 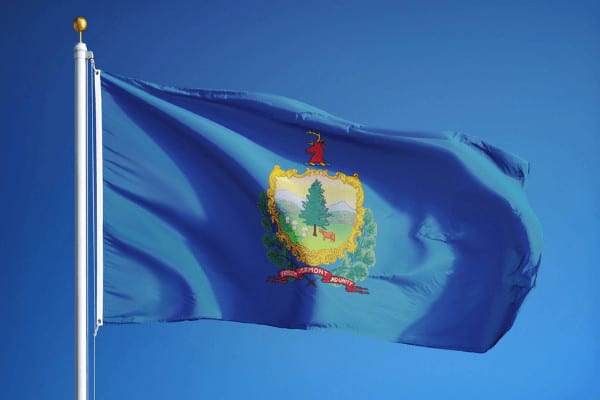 Copies of vital records ranging from 1760 to 2008 in the state registry, which is managed by the Vermont Department of Health, are available online through FamilySearch and Ancestry.com. Pursuant to 18 V.S.A. § 5002, there are no restrictions on public access to Vermont vital records. Unlike certified copies, copies from microfilm or any of the internet resources below cannot be utilized for legal purposes. A updated and searchable index to 1909 and later birth and death records in the state registry is supplied by the Department of Health.

Prior to 1850, death records in Vermont were recorded by town clerks in town and land records, which were accessible to the public. After 1850, this information could only be found in the records of the town. In the past, town clerks were in charge of recording death information; however, as of today, the town retains ownership of the death records. From the end of the Revolutionary War until the year 1870, records were inconclusive. The establishment of the state’s Board of Health in 1870 resulted in a full overhaul of the town’s record-keeping procedures. The majority of Vermont towns are relatively similar to western townships, and as a result, some of the most populated areas are located within the town’s boundaries. As a result, the official documents are written in the town’s name rather than the popular name. If you are unable to locate your ancestor’s records, look for them in substitute records or in neighboring municipalities.

FamilySearch
FamilySearch.org has birth, marriage, and death records from the Vermont Vital Registry System dating back to 1760 and up to 2008, which can be found online. Anyone can use this site to search for information and even print copies for free.

Ancestry.com
From 1760 to 2008, records from the Vermont Vital Registry System, including birth, marriage, and death records, are available through Ancestry.com, and internet access is available to Vermont residents through the MyVermont.gov state portal, which is provided at no charge. MyVermont.gov accounts are completely free, and can be obtained by visiting their site here. Vermont residents will get a link to Ancestry.com once they have logged in to their account.
It is necessary for all users to create a free, no-cost Ancestry.com account in order to access Vermont vital records, which is required by Ancestry.com. We recommend that you create a free Ancestry.com account and connect in to that site before attempting to log into MyVermont.gov. Contact NIC Vermont, which operates the state portal, at 802-229-4171 if you are experiencing difficulties with your MyVermont.gov account. 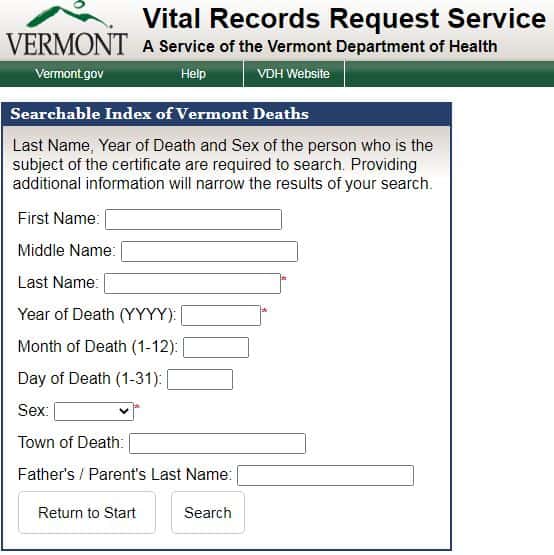 How to Find Vermont Death Records

The most dependable means of obtaining Vermont death records to do so through Archives.com. You will have complete access to the death data for the state of Vermont as soon as you log into the platform after completing your registration for an account. To get you started, here are a few easy actions you may take:

Step 2: Use the buttons at the very top of the user page to navigate through the options. When you click on the “Search” button, the Vermont state death records page is loaded.

Step 5: The state of Vermont should be entered in the ‘Location’ box. As soon as you begin typing, you will notice that the website will provide a match for you.

Official death certificates are those that are issued directly by the Vermont state government or a similar institution and are not issued by a private entity. There is information on the individual contained in this document, such as the individual’s first and last name(s), physical address(es), date of birth and death, among other things.

These refer to official files that contain information pertaining to a deceased individual.

Are Vermont Death Records Open to the Public?

What Information Do I Need to Search for Vermont Death Records Online?

The state of Vermont is extremely particular about the accuracy of its tax and voting records, and this is reflected in its state records. As a result, they strive to keep a comprehensive death record up to date. Following the death of a person, tax collectors contact family members or next of kin to collect any unpaid state taxes that may be owed to the state. In the event of a probate proceeding, these death records will be extremely useful because your family members or next of kin will not have any difficulties in obtaining any legal information. With our comprehensive guide to Vermont death record searches, you’ll be able to locate any type of record that you might require in a matter of minutes.